The latest reports out of Phuket and Bangkok, the most notorious places when it comes to Ed-visa violations, suggest that within their regions the 1 year Non-immigration Ed-Visa will no longer be available, to anyone, no matter the course length. These reports come only a short time after official laws were introduced, lowering the maximum 5 year stay to the current max 1 year stay.

Right now the reports have only been coming from students within the schools effected, as nothing official has been announced by the Immigration department nor the Ministry of Education. Highlighting the positive aspect in which most other regions in Thailand be most probably not be affected. Helping people realise that if this was a direct order from head office was, than an announcement would have precluded the reports, not the other way around.

One student wrote ‘ ( I )wanted to find out about upgrading my package to their unlimited so I can stay the full year. He said 1 year ED visas aren’t around anymore. It doesn’t matter if you have an unlimited or 400hrs of study, after 6 months you need to leave the country & apply for a new 6 month ED visa.’

While his school and others in the Bangkok and Phuket regions are obvious going through a localised crackdown, minds still rest easy in the rest of Thailand, as Ed-visa violations aren’t even half as prolific.

The one year Ed-visa has caused a lot of trouble in the past months, since the Coup crackdown on corruption the ‘farang’ visa situation has been highlight as a main area for the new sheriffs in town to focus on. The decision to reduce the 5 year max Ed-visa to 1 year was only taken 5 months before these reports, showing another sign of inconsistency behind closed doors.

While the visa situation is still prone to change, the situation has become more stable since the announcement of the minimum 400 hours year stay, which while still unenforceable, is in the process of being implemented by many law abiding schools across Thailand. 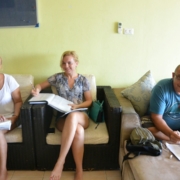 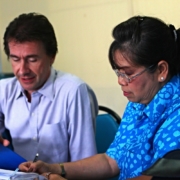 Interview with the school director

Want to join the discussion?
Feel free to contribute!